When I was on stage I mentioned that I’ve been lucky to have had tons of great stuff happen, with over 18 million views how could it not? I said something along the lines of, “I’ve been featured in many media outlets, won many awards for being an entrepreneur… I’m still waiting for the Ellen Show to call! (which of course received a laugh).

After I got off stage and calmed down from the high I just experienced, including the love and hugs I received from everyone waiting in the lobby area for me, I was able to go on Twitter to see the tweets from people. And a heartwarming thing happened. A few people started Tweeting the Ellen Show saying they should have me as an inspirational guest on the show! 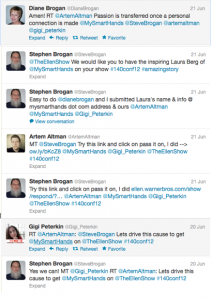 I was blown away by the people actively tweeting to the Ellen Show and their tweets being retweeted by others. It was heartwarming to see! Of course I’d love to be on the Ellen Show for personal and professional reasons. I LOVE Ellen (like many many many other people) and the exposure would be amazing BUT in all honesty those aren’t the main reasons why I’d want to be on the show. I would love to tell my story, to have people understand that one little person can make a huge difference in the world by sharing her passion. Whenever people ask me what I do I always say that I’m the owner of My Smart Hands, a baby signing company, but I don’t feel that does it justice. I want to say “I’m changing lives one video at a time” I want people to know that if we all decide to share and be open and kind to one another then the world will start to shift to existing more in the positive. If you affect just ONE person in a positive way then this world is getting better. If we all just touch ONE life in a meaningful way then life becomes better! And that should be enough… and that should be easy… just share who you are and see what happens!

I want to give a huge thank you to Artem Altman (@ArtemAltman), Steve Brogan (@SteveBrogan) and Diane Brogan (@DianeBrogan) for finding the Ellen Show link of how to submit an Inspirational Guest. I can’t express to you all enough how much it meant to me that you took the time to find the link and tweet it out. You all will be the first I tell if I ever do make it to the Ellen Show 😉

And of course a big thank you to all of the people in the pictures above who tweeted and retweeted. It honestly means the world to me!

I have since become good Twitter friends with Steve and Diane. I look forward to getting up in the morning and having our group hellos, good mornings and hugs. 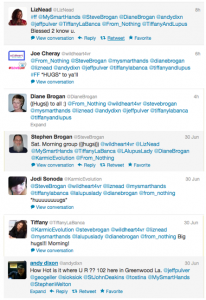 Example Tweets of Love and Connection

A bunch of us from the conference want to keep the love going and we all will touch base on a daily basis. We don’t say much of anything other than ‘I’m thinking of you’. It’s lovely to be connected. Just after the conference when I showed one of my friends all the tweets going on about the Ellen show she said, “It’s cool that Chris Brogan’s parents are tweeting Ellen for you.” I said, “Who’s Chris Brogan?” To which I received a good ‘how can you be so clueless’ look from my friend. She did a quick search on google and showed me who he was (sorry Chris!! I’ve been in a mommy bubble for many years now) 😉

Yes, it is cool but I really could care less about Steve and Diane being the parents of someone famous. I am married to someone famous and we have many famous friends. That doesn’t make an impression on me. What did make an impression on me is how absolutely lovely these two people are and the authentic relationship were were developing. After the conference I went out for drinks with Tiffany LaBanca one night and she was telling me how she had bonded with them and that they’ve agreed to adopt her 😉 Steve and Diane are soon moving to Las Vegas and Tiffany got an invite to come stay with them. I jokingly tweeted with them asking if I could join Tiffany in Vegas too. Steve tweeted back “The more the merrier!” This statement goes to show the type of people Steve and Diane are. Visit their blog to get to know them more.

And further to the authentic relationship, I didn’t know what Tiffany did before we became friends. I liked her as a person and knew she and I would be friends forever. It wasn’t until we were out for drinks when she was asking me how I was spending my spare time in NYC (it was my first visit to NYC!!) I told her that I had just had a meeting with my publisher and the PR team that will be promoting my book that morning and they were talking about pitching me to all the big media: Fox, CNN, the Today’s Show, Ellen etc. Then Tiffany said to me, “Tell your PR person to email me and I can help her figure out the best people to contact at Fox.” I thought that was nice of her to offer, I said, “Thanks!” and then, “What do you do?” She replied, “I work for News Corporation.” Doh! I had no idea what she did for a living. And yes, I’m sure she’d be able to help point us in the right direction, which is great and beneficial. BUT our relationship was not built on ‘what you can do for me‘, it was build on ‘I love this person’s energy and want her in my life‘. It was authentic!

The word authenticity and being authentic is thrown around a lot when talking about social media. That word is the perfect word to describe all my friendships that have come out of the #140conf. My friendships are all authentic. I am not friends with them because of who they know or what they could do for me. I am friends with them because I like them as people. Our connections are authentic!

And now, my final comment on my #140conf experience. During the morning of day one I sat in the audience and listened to Andy Dixon (@AndyDixn) and his lovely wife Linda share their story. I specifically wanted to hear what they had to say. This is a must watch video – I will post it here once it’s online. Andy talked about “Felonism”. This is a word that he and Linda made up. This is a word that needs to be in our dictionary.
Definition:
Felonism – is a prejudice against People with Felony convictions. Its a mind set that is against second chances.

On the second day of the conference I saw Andy standing out in the hall finishing up a conversation with someone. I had wanted to talk to him a number of times but he was always busy talking with different groups of people. Finally, he was alone in a hall and it was my chance to meet him and tell him that I have huge respect for him and the message he is sharing with the world.

The reason why Andy’s story touched me so much is because I’ve experienced ‘Felonism’ first hand. My brother spent most of his youth and adult life in jail. I wanted to share this story with Andy. I told him that I was always embarrassed to admit that I had a brother in jail because people would automatically assume – ‘white trash’. I didn’t want people to think poorly of me or my family. My brother’s choices were not mine but I was always judged having a brother who was incarcerated. We were two different people!

As I was telling my story to Andy tears began to well up in my eyes. As soon as Andy saw this his great big arms came up and enveloped me. He said, in his southern accent, “darling, you need a hug” and “it’s okay, it’s good to share”. At that moment I knew that Andy and I would be friends.

I finished telling him my story. My brother had a tough life. We were both adopted and came from different biological parents. I loved my brother very much and he loved me. He was always looking out for me. My father wasn’t a kind man and my brother would always make sure he took the ‘punishments’, sparing me at all costs. He grew to hate my father and turned to a life of crime to escape his life at home. He was 12 when he went into juvie (a detention center for youth). At 18 he went into a maximum security penitentiary for three years.

When my brother got out of jail he said to me, “Do you know what prison did for me? It made me a better criminal.” He didn’t feel that he was given any skills to help him adapt to ‘normal’ life. He was locked up for three years, was told when to eat, shower and go outside. Then when his time was up he was expected to go into society and function as the rest of us. But one very important thing was missing, job skills and the luxury of being ‘hireable’. You see, no one wanted to give him a chance. He was a criminal, he was bad. No one thought to ask what caused him to end up in jail, how did he get there and how could they help him now. No! he was now scarred. Yet he was expected to function in society like the rest of us. It was a joke.

My brother was incredibly intelligent, very handsome and super talented at music and art. He could have been something if he had just been given a chance. Instead, he ultimately gave up and took his own life. He could not face a life of constantly having to deal with Felonism anymore.

I ended my story to Andy by saying that I thank my brother for who I am today. I saw the choices he was making and I knew that I didn’t want to make those same choices. So a big thank you to Andy for the term Felonism (and for being my friend) and a thank you to my big brother for helping to make me the person I am today.

I learned a lot during my two days at the #140conf. I am a better person for knowing all of the wonderful people I met in NYC. A big thank you to Jeff Pulver (@JeffPulver) for inviting me to speak at such a great event and for giving me the chance to make such amazing new friends!

The one piece of advice I can give you – be open, share your story, you just never know whose life you are going to touch.

All my love!
Laura